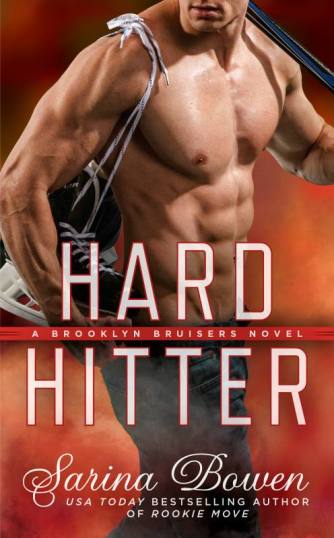 He’s a fighter in the rink, but he’s about to learn that playing nice can help you score…

As team captain and enforcer, Patrick O’Doul puts the bruise in the Brooklyn Bruisers. But after years of hard hits, O’Doul is feeling the burn, both physically and mentally. He conceals his pain from his coach and trainers, but when his chronic hip injury becomes too obvious to ignore, they send him for sessions with the team’s massage therapist.

After breaking up with her long-term boyfriend, Ari Bettini is in need of peace of mind. For now, she’s decided to focus on her work: rehabilitating the Bruisers’ MVP. O’Doul is easy on the eyes, but his reaction to her touch is ice cold. Ari is determined to help O’Doul heal, but as the tension between them turns red hot, they both learn that a little TLC does the body good…

There’s no doubt whatsoever that Ms Bowen is the queen of hockey novels. Her knowledge of this game never ceases to amaze me, her detailed account is as such that for someone like me who would love to see a live game felt as if she were there. It was actually like having a lesson in this sport’s ethics, too. I had a vague idea why there’s so much aggression on the pitch; however, I didn’t realise the importance team’s supporters give it. It seemed to me that more provoked violence there was, the more crowds were drawn in. I could quite understand how the female protagonist whose profession is tightly knit to the players felt while watching them get a good bashing!

I have to admit that I hadn’t read the first book in this series, but this didn’t affect my reading enjoyment at all. There wasn’t one moment when I felt out of my depth in the storyline’s fast moving pace and I easily became invested in all the characters. Ms Bowen also refreshed my memory regarding the sport’s vocabulary by explaining certain definitions to me. The importance of an Enforcer; a hard reputation to live up to and difficult to imagine. No wonder there are so many injuries in this sport since it is their job to impede or react to overly aggressive players. The high-pressure coming from all angles added angst to Hard Hitter and helped me comprehend how stressful it must be living up to this title. One thing is for sure, it’s only fitting for someone capable of taking on such a demanding responsibility. This person has to be built like a wall and take as much as he is given. This person is Patrick O’Doul.

“He has an ego the size of the stadium. If you have any trouble with him, I’m happy to play the bad cop.”

My heart went out to the captain of the Brooklyn Bruisers for more than one reason. Patrick is a lovely soul. A tad moody and quite the loner when it comes to his personal life, what I liked about him is he’s not at all full of himself! In fact, his concern for the game and attitude towards his teammates’ well-being I found humbling. Yet his handling of an unacceptable deed which was of his own doing, and his gullibility to trust those he shouldn’t have, really got me mad. In my eyes, it was the route of all evil. Nonetheless, how it panned out became a much-wanted twist and a half in the story. Although I tried to put myself in his shoes, for me, the whole situation was the be-all and end-all. I yearned for him to find a solution. In a nutshell, I was just as disappointed in him as he was in himself. Time is ticking away and he’s terrified that sooner or later the cat will be let out of the bag.

“He puts up an asshole front, and he’s kind of an egomaniac. But he’s got that whole macho honor code thing working. “

Henry, the team’s head trainer rubs salt in Patrick’s wound by ordering him to go to physio-sessions which he has no time or like for. How cool can a trainer be when all he wants is the best for his players! I really connected to this guy’s togetherness and had no option but to agree with him. He could do no wrong for me. And the press breathing down the captain’s neck helped little and added to my anxiousness. The new young owner of the hockey team who I might add, is gorgeous, appears to be the only one who has little to say in the matter but obviously wants results. Results. Always results. Companions will back him up without knowing the whys and wherefores because they have faith in him. And the plot thickens!

“Why, Patrick O’Doul.” “I’d almost think you liked this.”

To my delight, Ari Bettini saunters into the scenario like a breath of fresh air. This is her moment. Her chance to do something she loves and show them what stuff she’s made of. She also needs a break from her past and no way wants to mess it up. So, this change in her life couldn’t have come at a better time as you will see. Now it’s not going to be a bed of roses. She’s not only got to convince one of the players that he needs her expertise, but put to use her mental skills on the whole hockey team. After much cajoling, Patrick goes to her appointments and is grateful that she respects his personal space. I loved how Ari trod carefully and tended to his needs with utter professionalism and no favouritism. Once he realises that she could help him with his injury and fears, he’ll try his hardest not to miss his hour with her. There’s much more to Patrick than meets the eye though. On occasion, both he and I were confused by some of his out of character actions. Certainly, the likes of breaking rules weren’t on their agendas—thus, how they’d deal with them side by side makes for an heart-warming read.

“I wouldn’t ever touch a client inappropriately. It would violate the trust that you give me when you climb onto my table.”

The banter between Ari and Patrick is fabulous. Texts go back and forth as they feel their way in a relationship which boils down to trust. They made me cry, smile and brought out all my emotions. If it were ever possible, I could have given them a good talking to. At times, I had my doubts! Ari doesn’t want to let on about her past and O’Doul’s not forthcoming about his, either. What is plainly obvious is the sizzling hot chemistry between them. Ah, but if it wasn’t for her! The saying — ‘Behind every great man is a great woman,’ couldn’t be more fitting in this story.  Because she is great. Can he be great by her side?

“Humor me. I’ve never had anyone to spoil before now.”

The author’s character development is as always, par excellent. Her storytelling technique in this book is unusual since dates mark a timeline above and beyond pucks, goals, love or sorrow. It is a story that melds perfectly into her concept of happenings and I can’t wait for PIPE DREAMS coming in May. Bravo Ms Bowen! Sarina Bowen is a USA Today bestselling author of contemporary romance and New Adult fiction from the wilds of Vermont.

Her Ivy Years and Brooklyn Bruisers books are hockey romance novels. These two connected series began breaking hearts in 2014 with The Year We Fell Down. See http://www.sarinabowen.com for updates.

HIM and US are the bestselling, hockey LGBT novels co-written with Elle Kennedy. HIM is also a finalist for the Romance Writers of America’s RITA® Award.

Sarina enjoys skiing, coffee products and a nice glass of wine. She lives with her family, six chickens and more ski gear and hockey equipment than seems necessary.

She would be honored to connect with you at http://www.sarinabowen.com.

Why not get in touch with Sarina? She’d love to hear from you!