“In the end, only three things matter. How much you loved, how gently you lived, and how gracefully you let go of things not meant for you.”
– Unknown

It was a big lie. The biggest lie she’d ever told. It reverberated through her head as she said it, ringing eerily, and the girl behind her eyes—the girl who knew the truth—screamed, and her scream echoed along with the lie.
“Are you in love with Noah, Mercedes?” Cora asked. “I mean . . . I know you love him. You’ve been friends forever. We all have. But are you in love with him?”
If it had been anyone else—anyone—Mercedes would have stuck out her chest, folded her skinny arms, and let her feelings be known. She would have claimed him. But it was Cora. Brave, beautiful, broken Cora, and Cora loved Noah too.
So Mercedes lied.
And with that lie, she lost him. With that lie, she sealed her fate.
She was the best friend, the bridesmaid, the godmother, the glue. She was there for the good times and the bad, the ups and the downs, the biggest moments and the smallest parts. And she was there when it all came crashing down.
This is the tale of the girl who didn’t get the guy.

Once in a while you pick up that book. Even before you get to the second chapter, you know it’s not only going to keep you glued to the pages, but also be one of those stories which will bring out all the feelings. So, I finished The Smallest Part a couple of days ago and I’m still not sure whether this review will do justice to such a timeless read or not. But before you pick this standalone up, a bit of advice is in order because I was given much of the same… ”You won’t be able to put it down when you start it!” “Like hell I won’t,” I said to myself! Well, as I couldn’t adhere to this warning, I’d suggest disconnecting your phone, switching off any distracting gadgets and asking your folks nicely to do a disappearing act for the day. Or in my case, get your partner to put earplugs in and ignore you! Harmon’s way with words enchanted me. I was mesmerized, left aghast and sobbed into my pillow. And to quite honest with you, if there is a book which I have found so faultlessly enkindled, this has to be the one.

My book bestie who had already read it was bombarded with my messages. I told her what I thought and of course, she never agreed or disagreed with me. Her encouragement to read on was just enough because there were times when I simply couldn’t deal with some of the scenarios. And I’m not exaggerating when I say I felt as if I was choking half the time. Many moments of pure tenderness brought joy to my heart but didn’t counterbalance tough decisions made, making me want to jump into the protagonists’ lives and give them both a good talking to. I knew they knew…they just didn’t want to see what I saw. But then again, nothing is surprising seeing as circumstances prevailed and seeing as this is Harmon at her very best, I simply couldn’t have asked for more.

A low-keyed passion simmers below the surface. I actually had difficulty fathoming this out since one would think that love has no boundaries. There are more hurdles in Noah Andelin and Mercedes Lopez’s ‘bestie’ relationship than I could ever have imagined. However, judging their stances never crossed my mind. Before all the facts were presented, I thought them being so selfless towards each other was what true friends were made of. It was a small part of them; their love, unwavering respect and stubbornness was much bigger than bearing the weight of the unexpected. I’m sorry to say that I did judge Cora. She certainly kept me guessing; I got it all wrong though. When the twist and a half was presented, instead of pitying her, all she seemed to do was dismay me more. After much contemplation, forgiving her wasn’t as difficult as I thought it would be since all said and done, we’re all only human and we make mistakes.

I really don’t want to go into detail since spoiling this read for you would be an absolute crime. All I can say is three friends grow up together, share all their experiences, hide secrets which shouldn’t have been hidden, love hard and pay even harder for things out of their control right up to adult life. A special word for Mercedes. She is the best. She stole my heart with such an ease and I am humbled to be have been given a huge part of her. I’ve hardly mentioned Noah. Meet him, get to know what a marvellous man he is and what an example he sets for all who have to go through what he did. And before I go, the cover…ooh my…It. Is. Perfect! The paper-chain figures… So Ms Harmon, my last word is simply BRAVO and thank you! 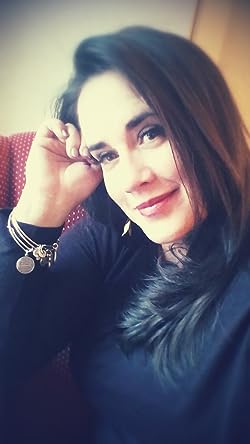 Amy Harmon is a Wall Street Journal, USA Today, and New York Times Bestselling author. Amy knew at an early age that writing was something she wanted to do, and she divided her time between writing songs and stories as she grew. Having grown up in the middle of wheat fields without a television, with only her books and her siblings to entertain her, she developed a strong sense of what made a good story. Her books are now being published in thirteen languages, truly a dream come true for a little country girl from Levan, Utah.

Amy Harmon has written ten novels – including the USA Today Bestsellers, Making Faces and Running Barefoot, as well as The Law of Moses, Infinity + One and the New York Times Bestseller, A Different Blue. Her recent release, The Bird and the Sword, is a Goodreads Choice finalist in Fantasy. FROM SAND AND ASH, her historical romance, will be released via Lake Union Publishing on December 1st. For updates on upcoming book releases, author posts and more, join Amy at www.authoramyharmon.com.

3 thoughts on “REVIEW ~ THE SMALLEST PART by AMY HARMON”

A book can take you anywhere